On May 18, 2019, RCMRD hosted the Hon. Kefentse C. Mzwinila who is the chairperson RCMRD's Conference of Ministers (CoM) and the Minister of Land Management, Water and Sanitation Services, Republic of Botswana. 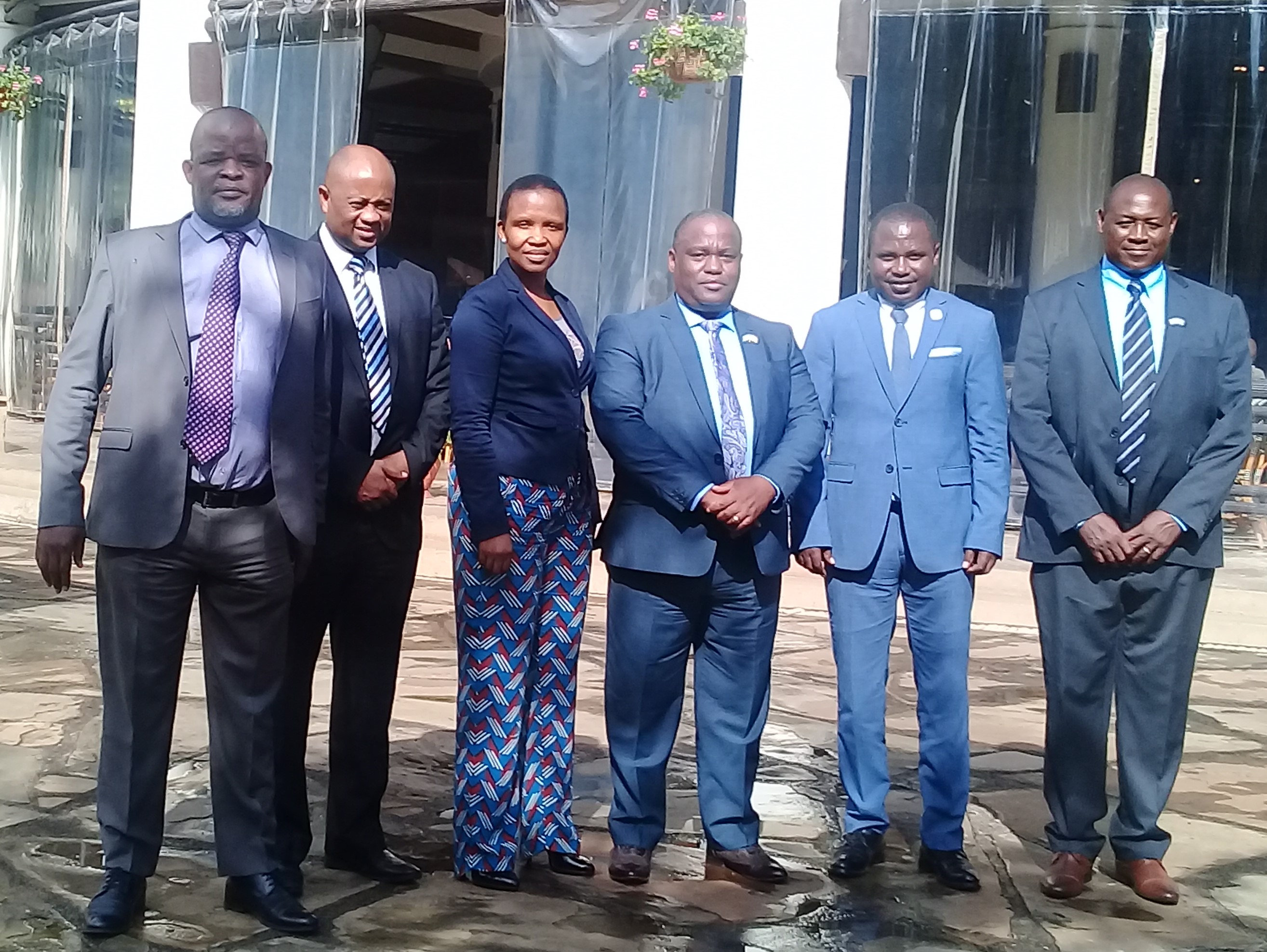 The GC Chairperson briefed the meeting about their entire visit and lessons learnt on the previous day before handing over to Hon. Mzwinila, Chairperson CoM, who briefed the meeting that it was a learning event to understand the Centre’s activities. The Minister requested the Director General RCMRD Dr. Emmanuel Nkurunziza to apprise him on the procedure of recruiting new member States, the current position and what his office could do to attract more States to join RCMRD. Dr. Nkurunziza explained that there were different approaches depending on the country. He noted, " there is always involvement of Foreign Affairs Ministries with support of the Chairpersons of CoM and GC. However, DG continued, the main challenge is when the Chairpersons of CoM and GC have the left the office without briefing the incoming chairperson." Hon. Mzwinila directed that RCMRD needs to target countries that are more likely to honor their annual commitments.

Mr. Joseph Murage the Monitoring and Evaluation Specialist presented the Strategic Plan 2019-2022 highlighting the key lessons learnt during the 2014 to 2018 strategic plan, the revised Vision and Mission, the strategic interventions and the key year 2019 work plan achievements for Quarter 1. This was followed by a presentation from Mr. Vincent Mtarooni the Principal GIS & Cartographic Officer on the Centre activities, initiatives and projects for member States and specifically for Botswana. He featured the geographical coverage, governance structure and the RCMRD Profile as well as products and services, thematic areas, capacity building, project Implementation including BIOPAMA, the census cartographic mapping, monitoring wildlife corridors, AFREF (African Geodetic Reference Frame) and the role of RCMRD as a National Spatial Data Infrastructure (NSDI) facilitator.

The Minister was given a tour of the Centre, where he interacted with the staff and witnessed the different activities taking place. He was particularly interested in knowing the number of member States with Satellites. To this, the DG Dr. Nkurunziza and Prof. John Kiema the Director of Technical Services said countries that have launched small satellite cubes included; South Africa and Kenya. They added that Rwanda had started using Drones. The CoM chair noted that it would be economical for countries to have shared Satellites, although he pointed out that it would be a lenghty process.

The Minister discussed with the management of RCMRD the progress of the implementation of the Strategic Plan, and in particular, resource mobilization for infrastructural development of conference and hotel facilities at RCMRD after reviewing the RCMRD master plan of the new complex displayed outside the DG's office.

The CoM Chair further discussed the issue of national spatial plans. He wanted to know how many member States have spatial plans and how they are using them to link that with development, economic, political and social planning. The management informed him that Kenya and Rwanda have Spatial Development Plans. The Hon. Minister noted that Botswana recently developed one with support of some Danish Consultants. He said after development of the Spatial Plan, there was an opportunity the Centre could explore developing National Economic Development Plan. Hon. Mzwinila further requested the Centre to identify opportunities to show case their technical expertise that included broad key areas such as development of spatial plans.

The Minister also asked if the Centre had the capacity to address water and related disasters such as the ones that occurred in Mozambique, Malawi and Zimbabwe. To this Prof. Kiema responded that the Centre had the capacity to address such disasters. He cited the SERVIR project models of flood warning that included CREST and Flash Flood Forecasting (EF5) that had been developed. Mr. James Mumina additionally said the Centre could partner with disaster management institutions such as the Kenya Red Cross and compliment their efforts.

In the tour of the SERVIR Eastern and Southern Africa (SERVIR-ESA) project lab, Mr. James Wanjohi a Technician on the project explained about the thematic areas: Agriculture &Food Security, Land Cover & Land Use Change and Ecosystems, Water and Water Related Disasters and Weather and Climate. The Hon.  Minister was impressed with Land Potential Knowledge System and asked whether it could be replicated in Botswana, how long it would take for it to be implemented in Botswana and what is would cost. Prof Kiema and Mr. Wanjohi responded that the system was free but there were associated costs on training and project implementation. It was agreed that RCMRD would submit a concept note detailing the requirements and budget. 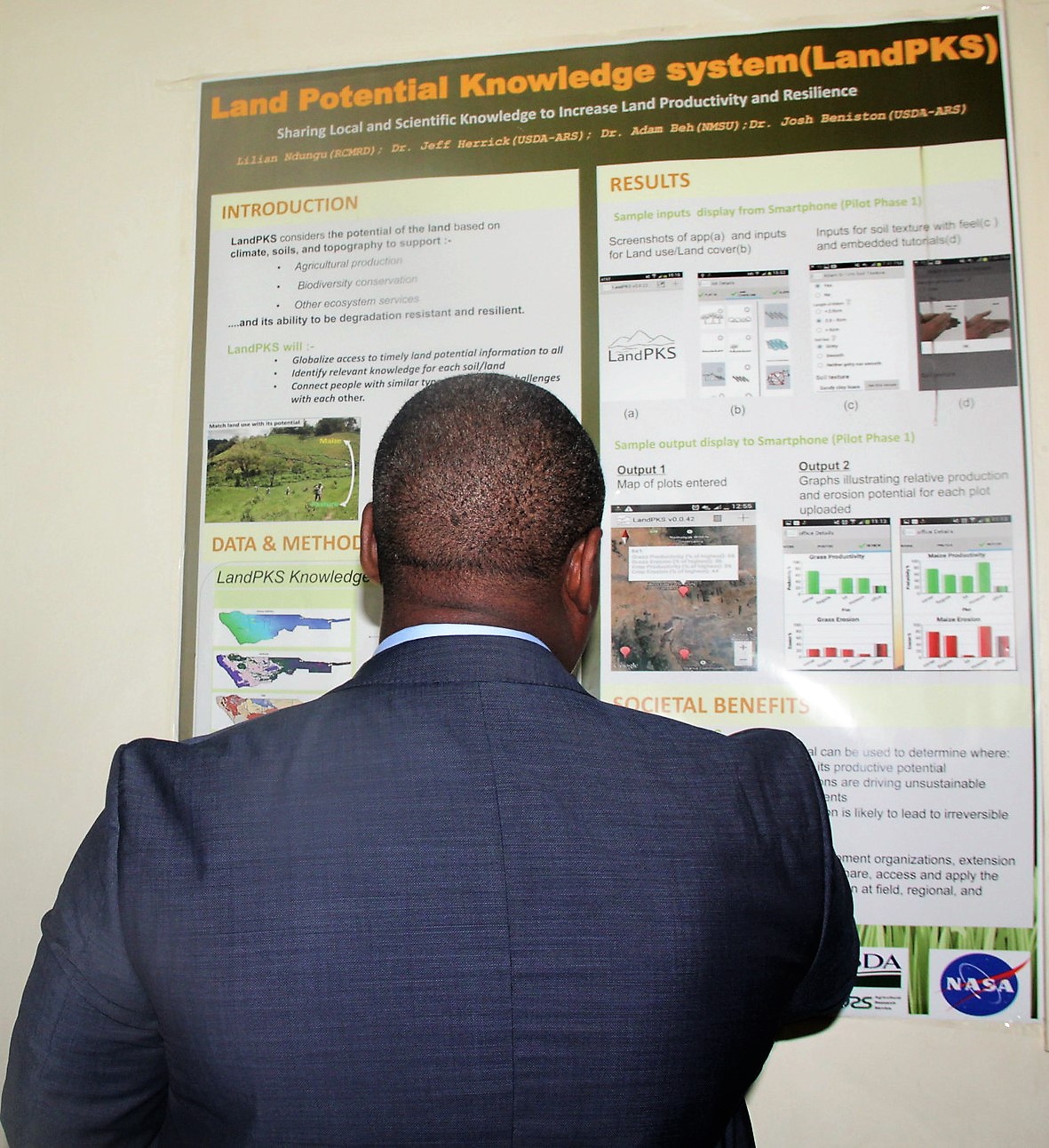 At the conclusion of their tour, the Hon. chairpersons assured the staff of their continued support to the Governing Council that will meet In November at RCMRD and to the Conference of Ministers to enable RCMRD achieve its mission and strategic plan.