The Regional Centre for Mapping of Resources for Development (RCMRD) held the annual RCMRD International conference (RIC) from September 6 to 8, 2022. The conference, under the theme Earth observation services for resilient social systems', sought to exchange ideas on the application of earth observation information and geospatial technologies for societal benefit.

The key keynote speakers who presided over the RCMRD International Conference 2022.

Speaking on behalf of the Director Department of Resource Surveys and Remote Sensing (DRSRS), Office of the Kenyan President, Mr. David Kiama, Assistant Department of Resource Surveys and Remote Sensing (DRSRS) and Head of Ground Division said to achieve resilience against vulnerabilities such as floods and droughts experienced in Africa, planning and decision-making processes should adopt evidence-based planning which can be supported by earth observation and geospatial technologies. Mr. Kiama noted that to be useful, the data collected from these technologies must be translated to information that helps to solve problems. Despite the increasing awareness of the importance of earth observation technologies as a tool to facilitate spatial data collection, access, and use in decision-making processes, Africa is yet to exploit the full potential of this spatial information. This is according to Mr. Andre Nonguierma, Chief geospatial information management section, United Nations Economic Commission for Africa (UNECA) during the fifth Regional Centre for Mapping Resources for Development (RCMRD) International Conference. 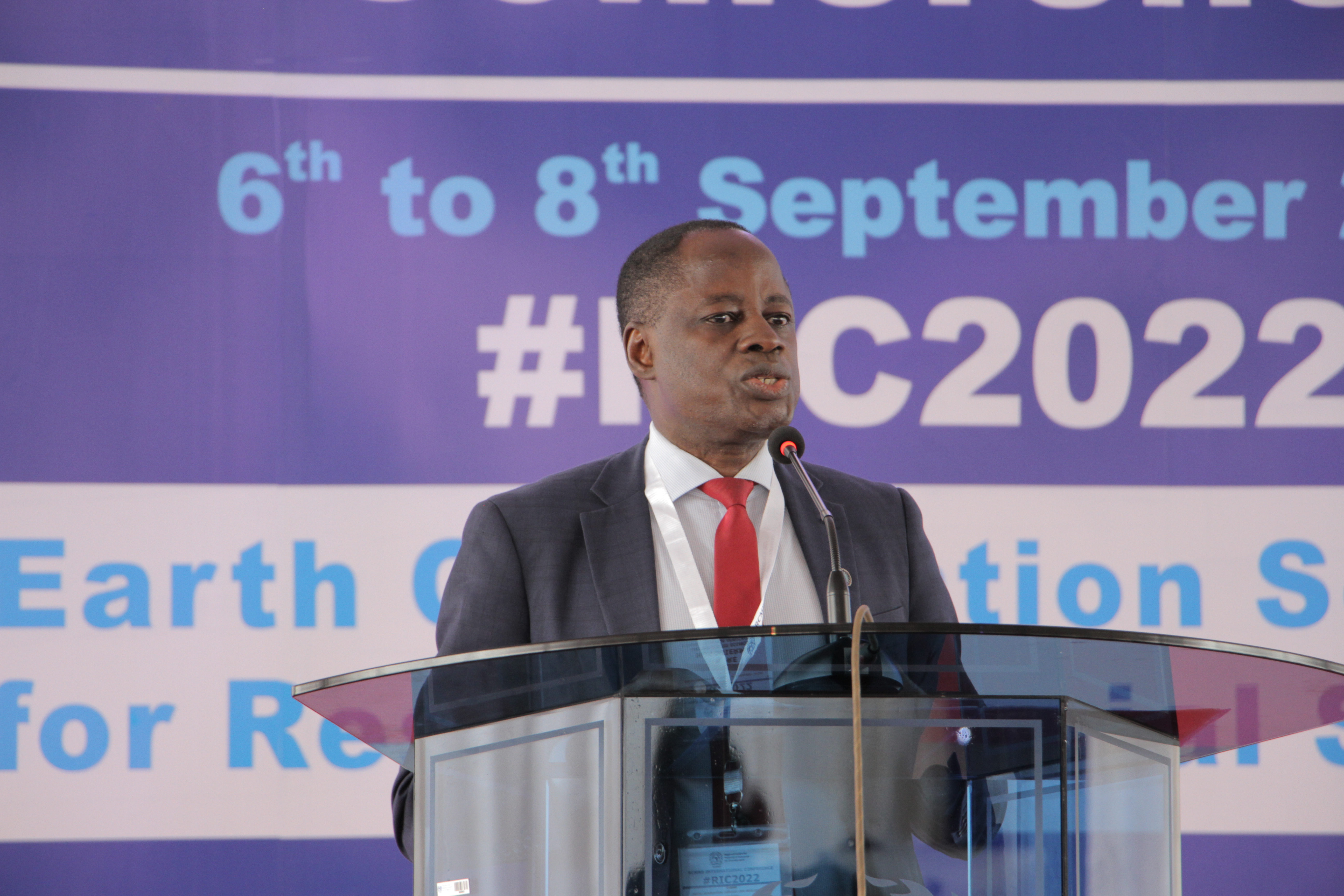 Mr. Andre Nonguierma the Chief of the Geospatial Information Section at the UN Economic Commission for Africa attended RIC2022. He also sits on the RCMRD Governing Council.

In line with the theme, Dr. Emmanuel Nkurunziza, Director General, RCMRD observed that technological advancements in various domains have become a crucial pillar in building resilient social systems. He said that the conference’s theme continues to provide a linkage between social systems and the potential and unrealized opportunities brought about by earth observation technologies for societal benefits. The RCMRD DG said we did hope and submit to each one of the delegates in RIC 2021 that was virtually held, that we looked forward to having a physical RIC 2022 and indeed our dream of meeting each other face to face has come to pass. We welcome you all to RCMRD, as many of my colleagues may call it “The Home of GIS and Remote Sensing.” 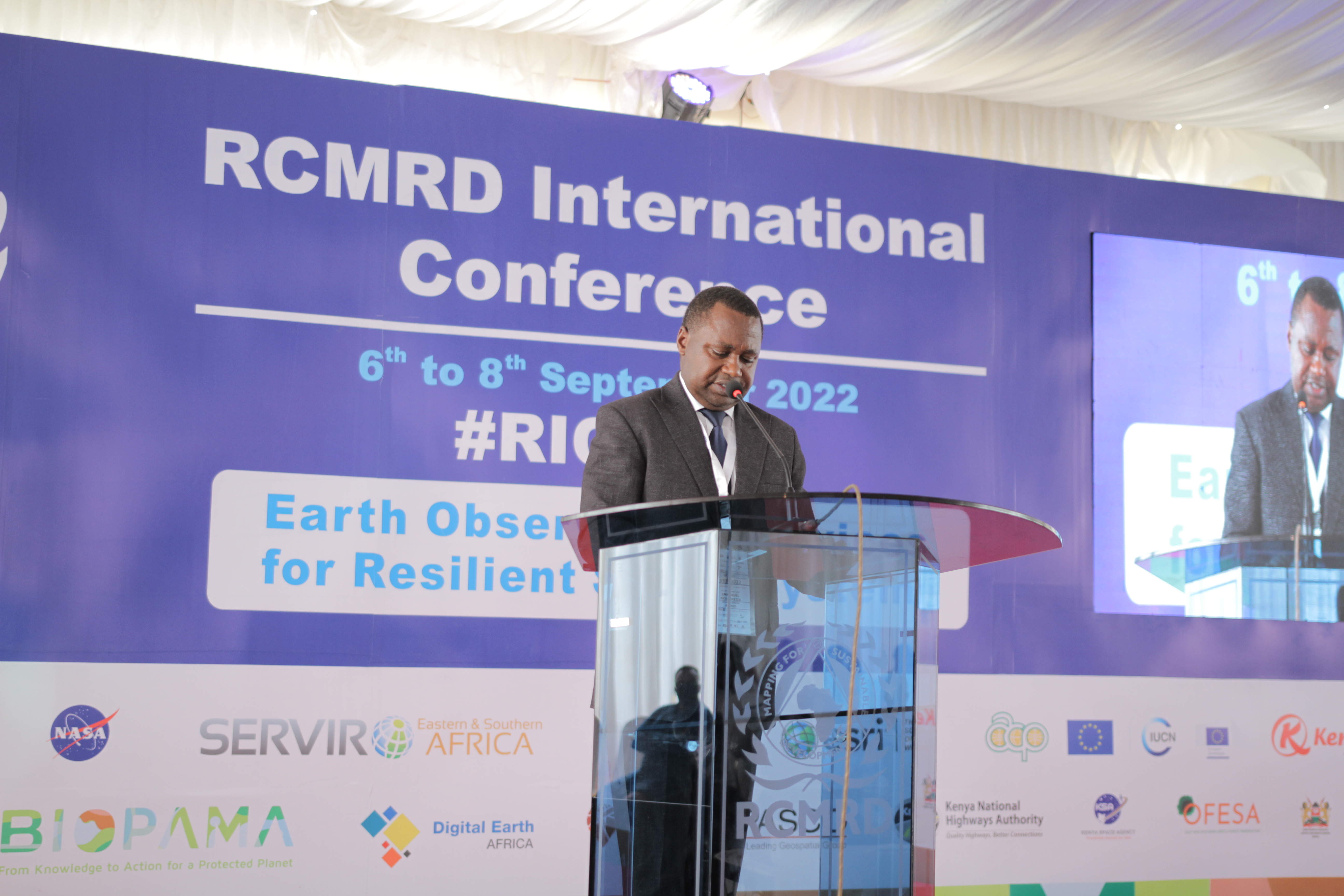 Dr. Emmanuel Nkurunziza, the Director General RCMRD made welcoming remarks to the delegates and partners who attended RIC2022 at the RCMRD premises.

The Food and Agricultural Organization said with proper data collection, analysis and technologies, countries can beat hunger. Mr. Hamisi Williams, the Assistant FAO Representative, who represented FAO country director Amb. Carla Mucavi, said his organisation had contributed to building the capacity of more than 200 technical officials in advanced geospatial information systems. “With the help of EU, we have established nine GIS labs in counties,” he said. Williams said FAO had also negotiated with the EU with a view to implementing digital land governance in all the 47 counties. He said some 30 counties are also set to have GIS labs that will also include capacity building of the technical staff. “This will unlock the potential of land as a factor of production,” he said. Williams said FAO had contributed a lot to the ongoing reforms in the land sector and was set to do even more.

Esri's Director of Conservation Solutions Mr. David Gadsden, said the climate is changing rapidly and no community is spared. “We need to be prepared and earth observation technologies must be tapped for the future of humanity,” he said. Esri is a global market leader in GIS.

USAID Kenya and East Africa’s Regional Climate Change & Resilience Specialist Ms. Chihenyo Kangara identified key regional development challenges as agricultural production, water insecurity and health and conflict. In a speech read by SERVIR Eastern and Southern Africa (SERVIR E&SA) Project Manager Dr. Robinson Mugo, USAID KEA noted that there was high population growth in the region and urbanization was at 55% growth. “Without changes in family size, the youth tsunami may overwhelm the region’s socio-economic systems, with implications for regional economic systems. Conflict is one potential outcome of the regional challenges highlighted already, but it does not have to be. 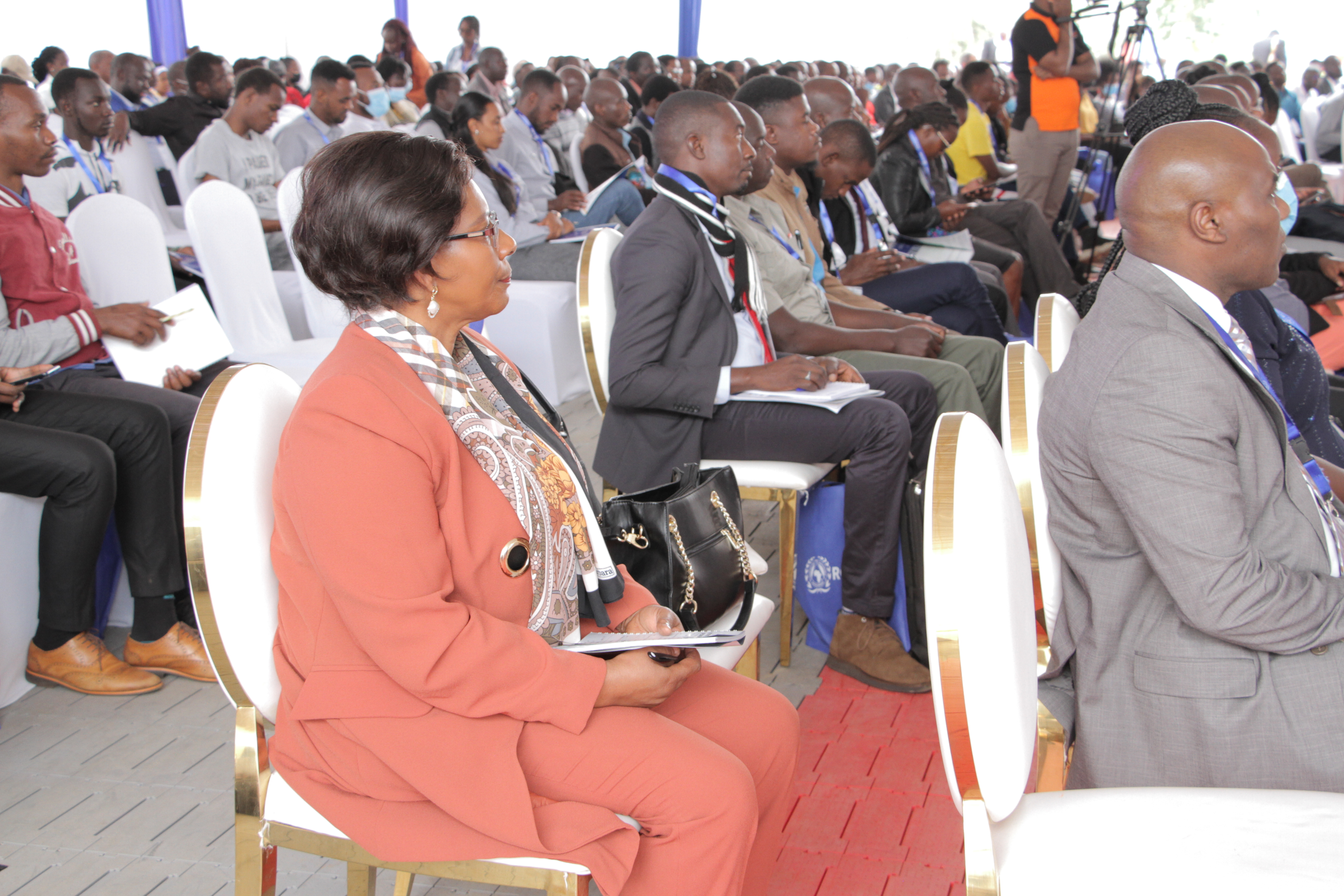 She said with regional cooperation and coordination, increasing conflict need not be the necessary outcome of these larger drivers of change.” The regional climate change and resilience specialist outlined the USAID Climate Strategy Objectives to: accelerate and scale targeted climate actions, catalyze transformative shifts to net-zero and climate-resilient pathways, adapt USAID operations and approaches to advance climate mitigation and resilience and further climate justice within USAID and partner organizations. NASA Global Program Manager and Co-founder of the SERVIR Programme, Dr. Dan Irwin, speaking at the Conference said the SERVIR Global program exists because NASA and USAID recognize the value of social systems in preparing communities for climate change and other challenges. He said SERVIR E&SA was the oldest hub established in the year 2008 at RCMRD.

Fahari Aviation general manager Mr. Hawkins Musili, gave a keynote address on Unmanned Aircraft Systems (UAS/drone technology) for Improved Decision Making. Vouching for the importance of efficient and accurate data collection, he noted that “inaccurate data undermines business results.” Between 50-80% of the time goes into proofing data for accuracy and according to Musili, drones are time-saving, more accurate, and cheaper than satellites. 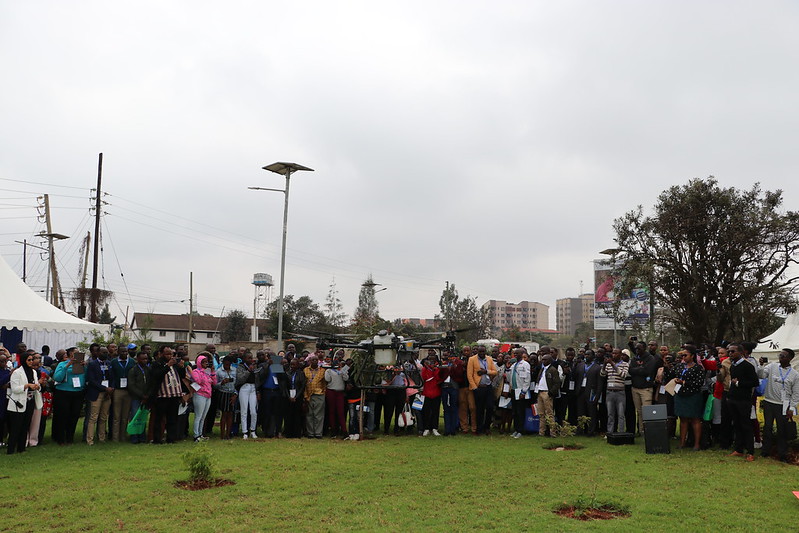 One of the drones used for mapping on display during the fifth Regional Centre for Mapping of Resources for Development annual conference.

Mr. Meshack Kinyua the GMES & Africa training officer, AUC representing Dr. Tidiane Ouattara of AUC in his closing remarks highlighted the longstanding relationship between RCMRD and AUC, dating back to 1975 and the ongoing implementation of the GMES and Africa a flagship programme of AUC where RCMRD is one of eight consortia implementing the programme. He conveyed his gratitude for the invitation by RCMRD and passed the apologies of Dr. Tidiane Ouattara who intended to attend the conference physically. “His heart and intentions are to convey support to RCMRD and this conference.” 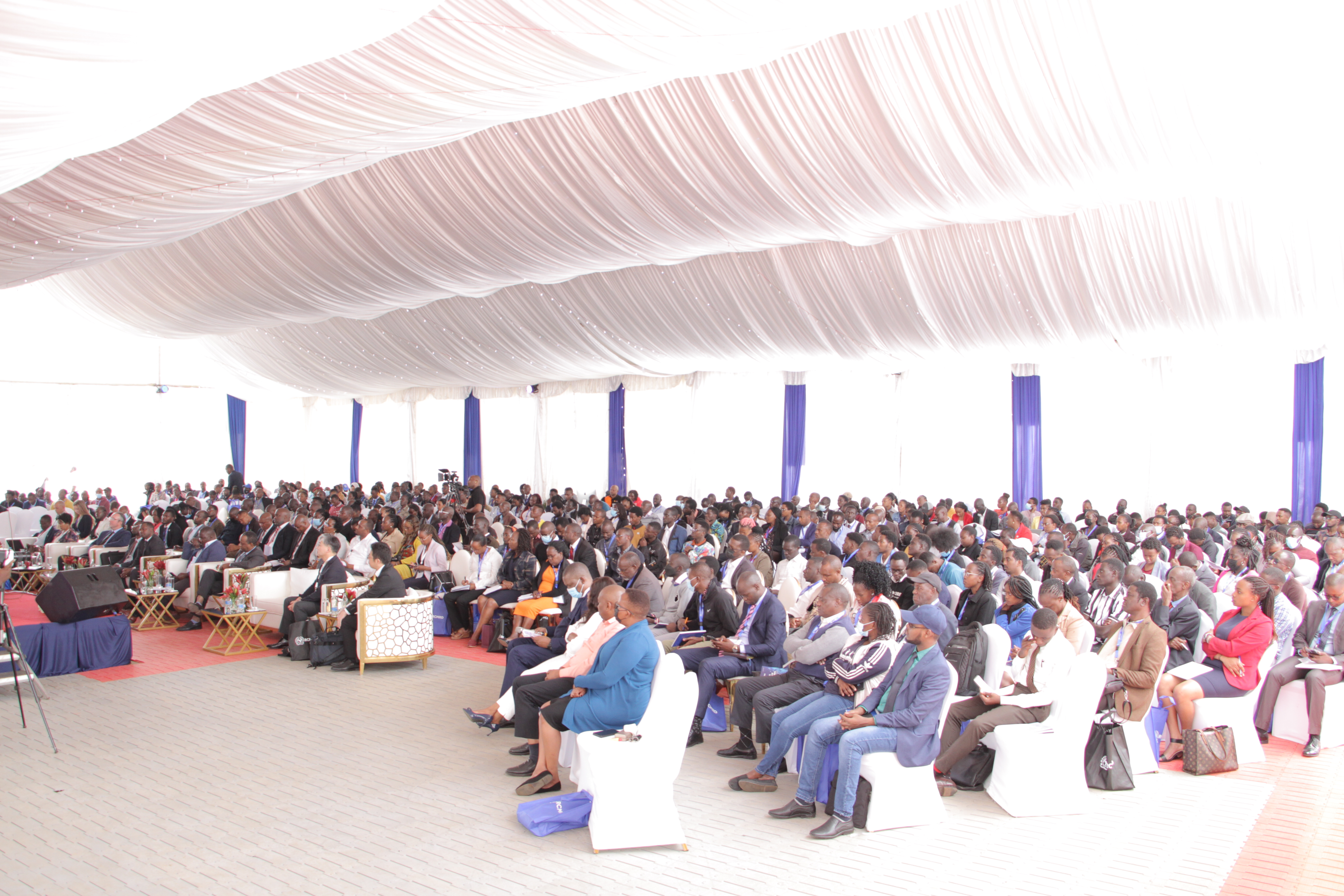 Dr. Ouattara noted that over the years, there was an engagement gap, however, a few years ago AUC decided to revive this relationship through the African Space Programme, a key flagship of AU agenda 2063. He added “As you know, the African Space Programme is a continental flagship focusing on four main domains: -Earth Observation - Satellite Communication - Navigation and positioning - Astronomy and Space sciences.” GMES & Africa is a joint Programme in EO between African Union Commission and European Union, with a network of about 120 national and regional institutions organize into eight consortia. RCMRD is leading one of the consortia since phase 1. “AUC is very intentional in strengthening RCMRD because of the impetus it gives in human capital development. This RIC has been a success by all means. We have seen how different actors are contributing to resilient societies and societies. We have learned a lot of lessons and I believe we have built sustainable networks.” Mr. Kinyua added that it had always been the call of AUC to develop user-centric services which means placing communities at the focus. “This agrees with the theme of the conference. Congratulations RCMRD for bringing us back together again physically after covid 19 interruptions.”

Below, find some articles published by Kenyan media: