On April, 18, 2020, the Regional Centre for Mapping of Resources for Development (RCMRD), clocked 45 years since it was founded. We had many grand plans of commemorating this occasion but like many other communities in the geospatial world, we are adjusting to new ways of working in response to the COVID-19 pandemic. Not only did it affect our ability to meet face-to-face, it is also leading us to think about how we can respond collectively using earth observation to map resources for development in our member States and beyond in this global crisis.

As a non-profit inter-governmental organisation RCMRD renders services in the fields of surveying and mapping including aerial photography, photogrammetry, photo-interpretation, remote sensing, calibration, servicing and maintenance of surveying and mapping equipment. The Centre also provides training for nationals of member States in the above fields of expertise. Our Training Institute- Regional Centre Training Institute (RCTI) increased the enrolment in Land Surveying, Cartography & GIS, and Information Technology from 432 students in 2018 to over 554 in 2019 and 126 sat for their KNEC exams recording over 90 per cent pass rate. The number of international students from member States increased from one in 2018 to three in 2019.  RCMRD also offers professional training to member States officers. To date, the Centre boasts of the training over 3,000 technical officers annually from its member States and other African countries in the fields of surveying and mapping, remote sensing, GIS and natural resources  assessment and Management.

RCMRD is the hub for SERVIR Eastern and Southern Africa Project in Eastern and Southern Africa, a partnership of the National Aeronautics and Space Administration (NASA) and the United States Agency for International Development (USAID).Through the SERVIR project, countries in East Africa continued to benefit from the implementation and support for national crop monitors. These monitors help stakeholders in countries regularly assess crop conditions and estimate productivity of a given season. RCMRD supported crop monitors in Kenya, Tanzania and Rwanda and plans are underway to support other countries in the coming years. 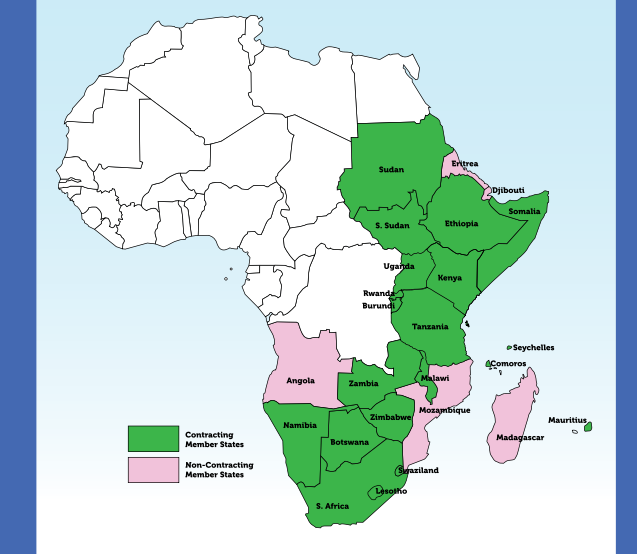 The RCMRD project portfolio also includes the Malawi Population and Housing Census Mapping, the Hazard Atlas Development and the Biodiversity and Protected Areas Management ( BIOPAMA) programme. The Centre manages a Web Portal and Data Repository for the Network of Excellence on Land Governance in Africa (NELGA), a GIZ and World Bank-backed project. The AGRA project is helping Malawi, Mozambique, Burkina Faso and Ghana establish GIS based web systems that can support the monitoring of key indicators in the agricultural value chain as part of the Comprehensive African Agriculture Development Programme (CAADP).

RCMRD was among the 13 successful institutions selected by the African Union Commission (AUC) to serve as Regional Implementing Centres for the Global Monitoring for Environment and Security and Africa (GMES and Africa) Support Programme. Under GMES and Africa, RCMRD is playing an important role in developing capacity of member States in Eastern Africa. RCMRD is implementing three services namely: Land Degradation Assessment and Monitoring, Wetlands Assessment and Monitoring and Open Geographic Reference Vector Dataset for Agro-ecological Zoning and Water. The services are being implemented in Djibouti, Eritrea, Ethiopia, Mauritius, Kenya, Rwanda, Somalia, South Sudan, Sudan and Uganda. In connection with service areas there are several training programmes which play an important role in capacitating the technical and support officers. Staff from RIC, Partner and Associate organizations have been benefiting from the trainings.

Following the adoption of RCMRD Physical development masterplan, implementation of its first phase is complete with a new office complex and attendant infrastructure. A bore hole was drilled to ensure constant supply of water to the Centre and a permanent perimeter fence built to secure the facilities.

Pioneer RCMRD programmes include the RCMRD Space Challenge, a climate orientation activity targeting primary and secondary schools in Kenya and Uganda and will be held in different RCMRD member States. The programme kicked-off in 2017 in partnership with the Trans Africa Hydro-meteorological Observatory and the GLOBE (Global Learning and Observation to Benefit the Environment). Following up on two previous highly successful editions, the Centre hosted the 3rd RCMRD International Conference (RIC) in Nairobi, Kenya from August 12-16, 2019. Alongside the conference the Centre was honored to host the 4thAfriGEO (the African Group on Earth Observations) Symposium after assuming its role as the AfriGEO secretariat. The objective of the RCMRD international conference was to spur the exchange of ideas on fast tracking the application of Earth observation and geo-spatial technologies in development decision making. RIC 2020 has been canceled entirely because of health concerns arising out of the COVID-19 pandemic.