The Regional Centre for Mapping of Resources for Development (RCMRD), an inter-governmental body based in Nairobi, is partnering with the National Aeronautics and Space Administration (NASA), and the United States Agency for International Development (USAID) under the SERVIR Eastern and Southern Africa (E&SA) program to promote gender-sensitive satellite index insurance products for farmers through the Gender-sensitive Agricultural Index-based Insurance (GAIINS) project.

On June, 6-10 2022, the RCMRD convened a workshop in Naivasha, Nakuru County, with key stakeholders drawn from the Government of Kenya and a variety of actors in the insurance sector and other private sector players in the agriculture sector, to explore the potential benefits of en-gendering insurance products for farmers in a number of counties (Bungoma, Embu, Makueni Uasin Gishu and Nakuru). The opening session of the workshop was presided over by Mr. Douglas Kangi, Director of Crops Management on behalf of the Principal Secretary for State Department for Crops and Agricultural Research of the Ministry of Agriculture, Livestock, Fisheries and Cooperatives, Dr. Francis O. Owino. Also in attendance were Ms. Chiheyo Kangara (USAID Kenya and East Africa) Ms. Emily Adams the SERVIR Regional Science Coordination Lead at NASA Science Coordination Office in Huntsville, Alabama and Dr. Emmanuel Nkurunziza Director General (RCMRD). 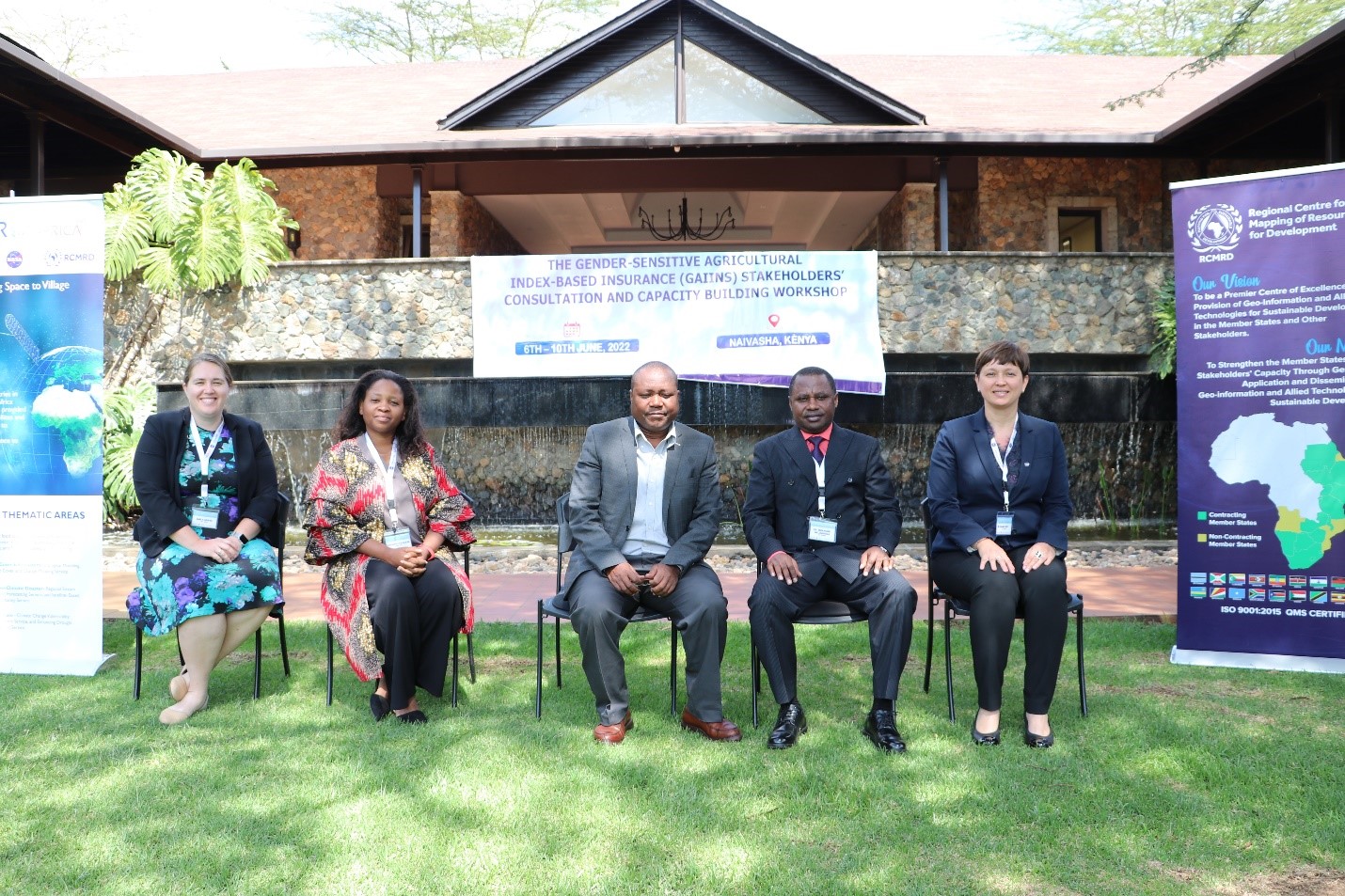 Mr. Kangi informed the meeting that according to the Kenya Population and Housing Census of 2019, 14.8 million persons aged 18 years and above engaged in agriculture. Out of these, 90.1% were in rural areas and 9.9% in urban areas. The proportion of females at the national level was 52.3% and that of males was 47.7%. In all counties more than 50% of the agricultural population aged 18 years and above were females. Out of the 5.6 million farming households that practice crop farming, only 6.7 per cent of the households practice irrigated farming. 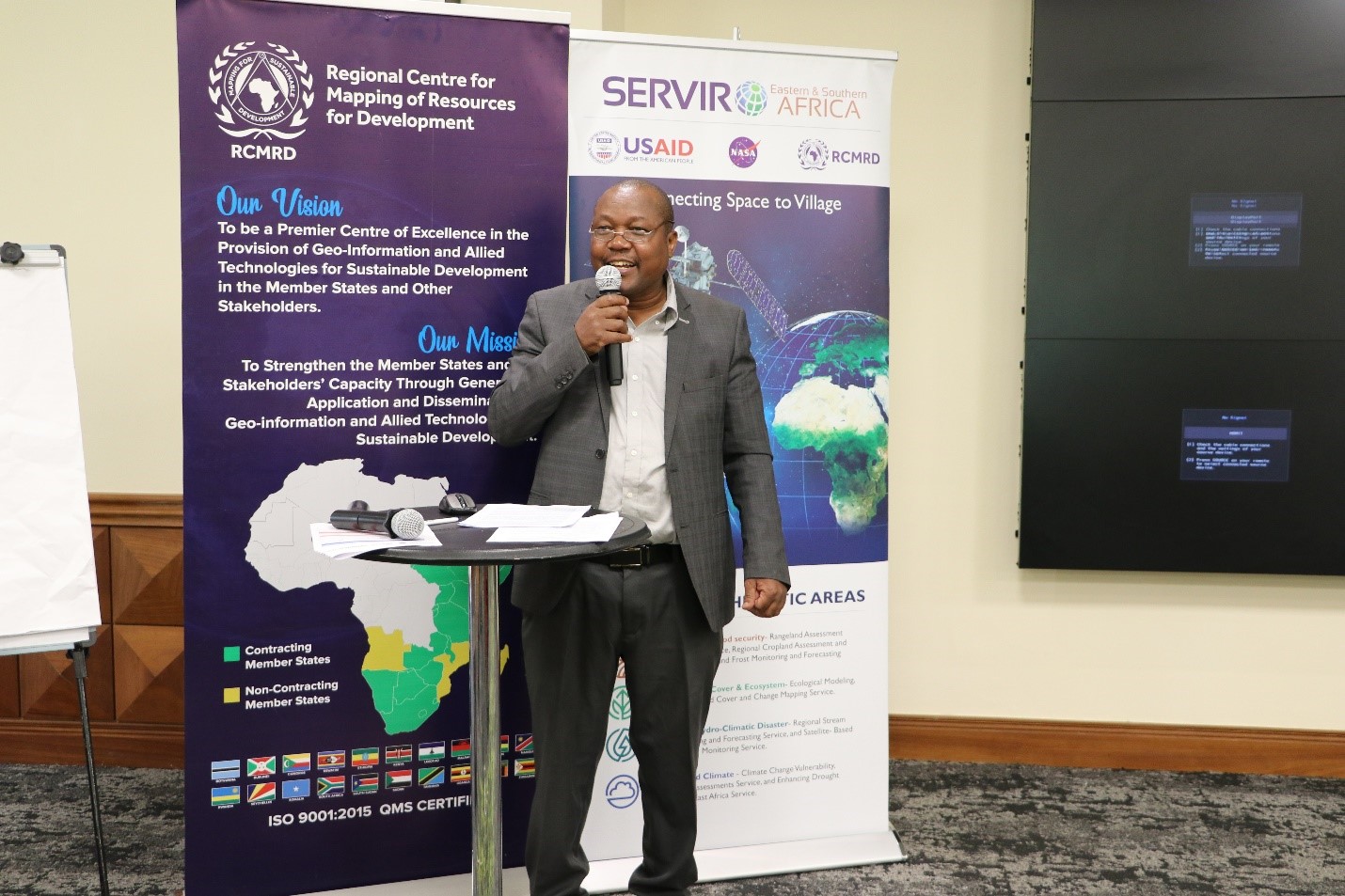 Mr. Douglas Kangi, Director of Crops Management on behalf of the Principal Secretary for State Department for Crops and Agricultural Research of the Ministry of Agriculture, Livestock, Fisheries and Cooperatives, Dr. Francis O. Owino.

The goal of the GAIINS project is to empower and increase the capacity of women farmers in the region to be resilient to climate shocks through uptake of index-based insurance, and simultaneously build the capacity of insurers to institutionalize gender transformative approaches to index-based insurance products. Satellite-based index insurance has been identified by the African Risk Capacity and the World Bank as a key tool for increasing farmer resilience against climate shocks. Investing in women, who form over 40% of African farmers, can lead to greater returns across the SDGs. With men and women being disproportionately affected by climate shocks and in turn affecting their resilience mechanisms, a gender sensitive lens is required to increase participation and inclusion in the design and implementation of resilience mechanisms including index-based insurance. 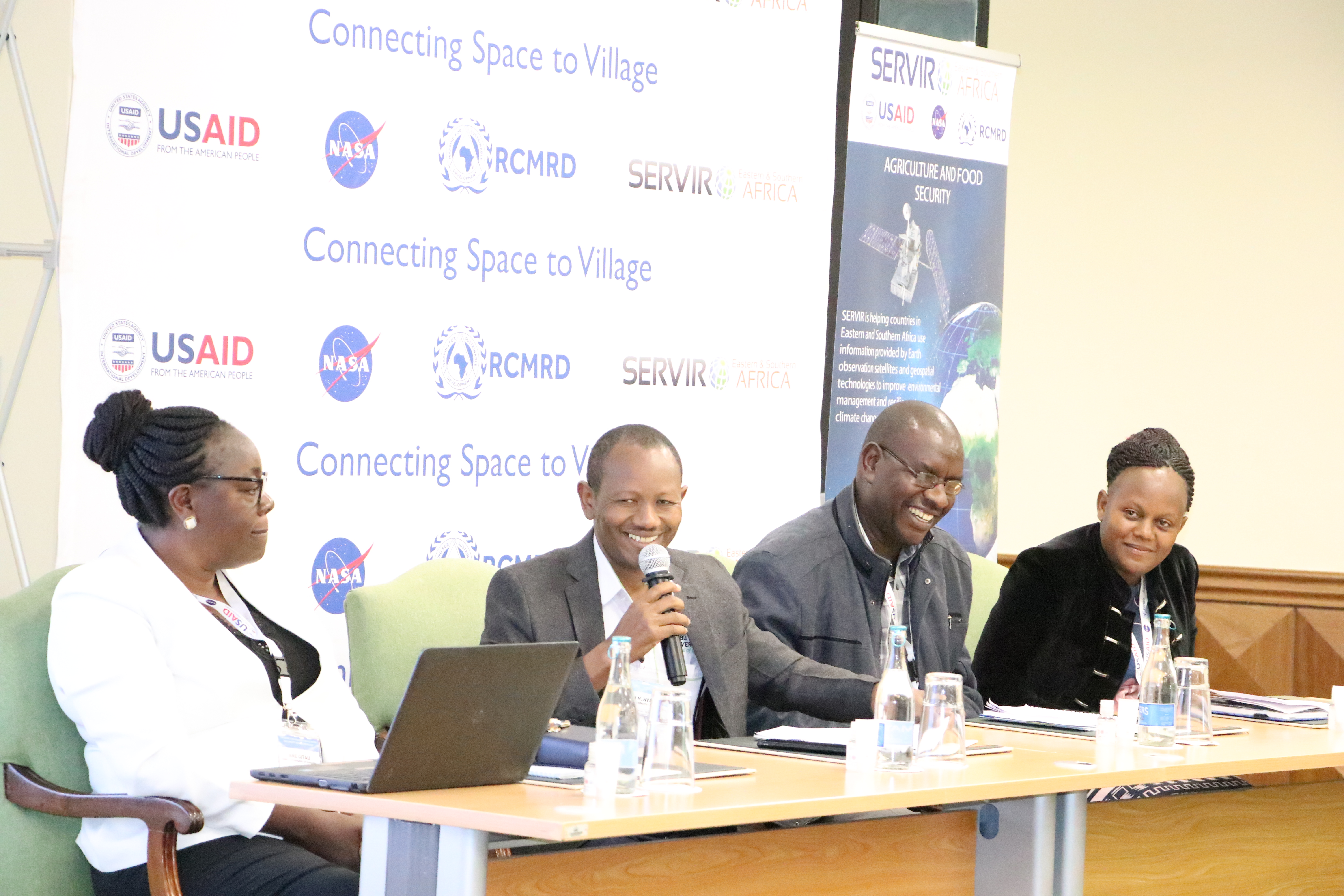 County Directors of Agriculture from Bungoma, Embu, Nakuru and Makueni attended the meeting and gave their experiences on benefits of en-gendering insurance products for farmers.

The RCMRD through the SERVIR E&SA project is supported by USAID’s Gender Equality and Women’s Empowerment Hub (GenDev) to conduct a transformative, gender sensitive index-based insurance research for agriculture program entitled: “Gender-sensitive Agricultural Index-based Insurance'' (GAIINS). The GAIINS project will work with the Government of Kenya, regulatory authorities, insurance actors, farmer organizations, women groups, financial and enabling partners, and farmers, to influence the design of gender-sensitive risk financing products informed by Earth Observations. This will be done through assessing the dual needs of women farmers and insurance providers including the social and gender norms affecting access and use of satellite-based index insurance products, co-developing gender sensitive quality metrics for index insurance products with both farmers and insurance companies, training actuaries and other insurance sector participants to measure and communicate gender-sensitive variables that inform the calculation of risk as well as providing access to and training women farmers on the ability of index-based agricultural insurance to protect them from climate-related shocks. 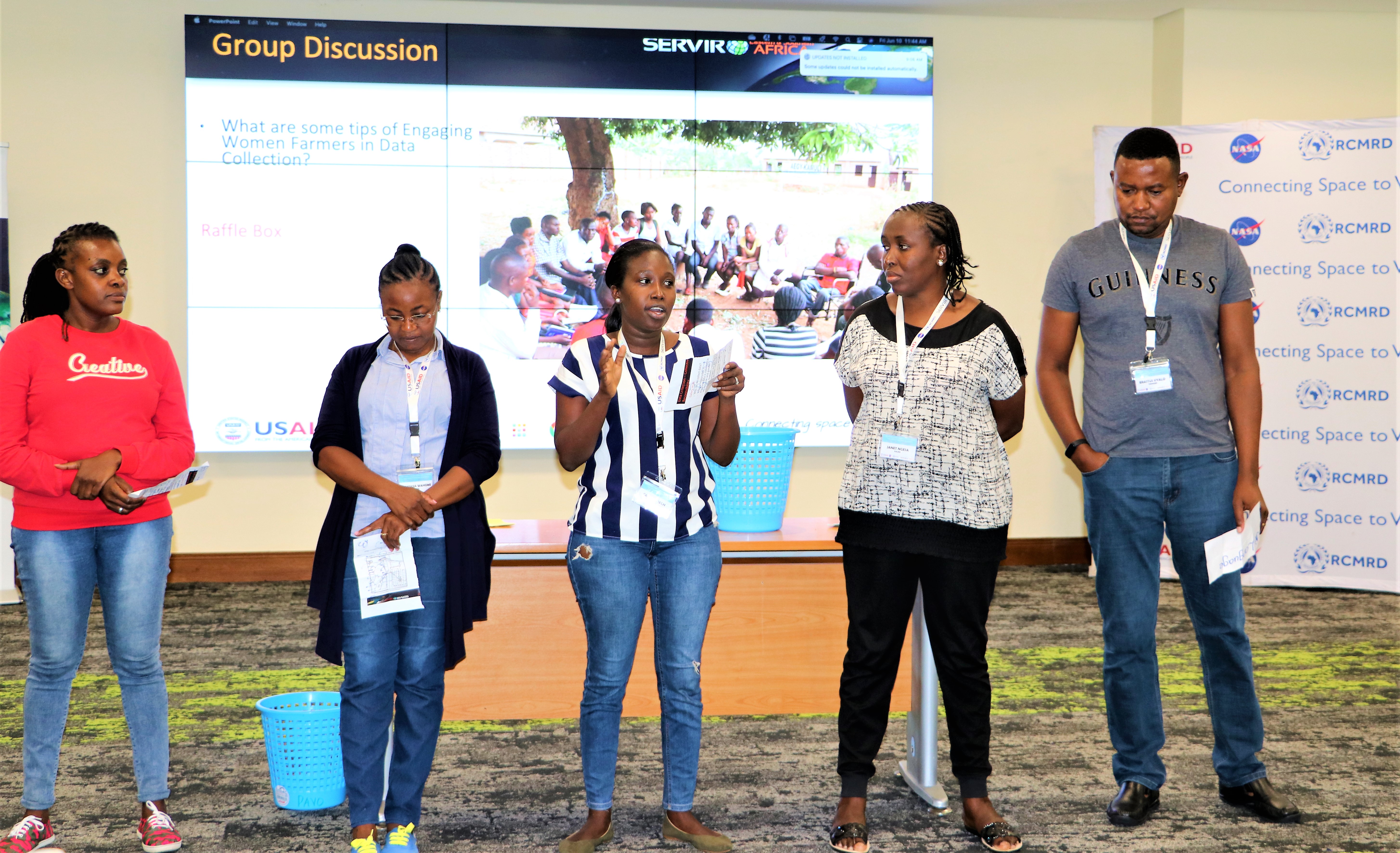 Participants presenting their group discussions during the training.

While making remarks at the opening session of the workshop, the RCMRD DG Dr. Emmanuel Nkurunziza noted that RCMRD through the SERVIR E&SA project was happy to make the linkages and integration of satellite data technologies with the insurance sector, and that demonstrated the reality of the SERVIR project mantra, “connecting space to village”. He further thanked NASA and USAID for continued support to RCMRD and partners, to ensure that satellite data and geospatial technologies contributed to solving national development problems. He emphasized the commitment of the institution to the GAIINS project and assured participants of the workshop that the design and implementation would be overseen successfully. Ms. Adams, the SERVIR Regional Science Coordination Lead at NASA Science Coordination Office underscored the value of satellite data in developing environmental indices relevant for the insurance sector. She highlighted an example of the value of satellite data in identification and sampling of unit areas insurance used by the Ministry of Agriculture. USAID Kenya/East Africa’s Ms. Kangara emphasized that the GAIINS project under the SERVIR partnership with NASA would respond very well to the needs of women farmers by cushioning them against a dual threat of vulnerability from climate change and from their lack of access to resources.