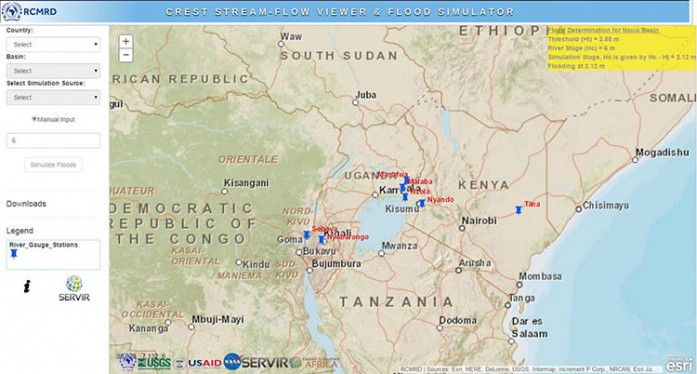 Floods are among the most devastating natural disasters in the Eastern Africa region. Having a negative impact on human lives and infrastructure, floods can do away with entire communities as well as a significant amount of the resources required in the process of rebuilding. As a result, RCMRD/ SERVIR-Eastern and Southern Africa (E&SA)

has provided the CREST (Coupled Routing and Excess Storage) Hydrologic Modeling Tool to a number of countries in the Eastern African region to deal with the problem. CREST integrates satellite rainfall information with land shape, elevation, soil characteristics, and other variables to calculate (model) actual evaporation, transpiration, soil moisture, and streamflow – factors that determine the likelihood of flooding. The tool is available in a historical version and a near-real-time, short-term forecast mode. Also, RCMRD/ SERVIR-E&SA has developed a CREST Viewer and Flood Simulator for specific basins in the region. These tools allow end-users to see the modeled information in the form of graphs and maps. In addition, these tools enable end-users, for example, water managers to readily assess impending and near-term likelihood of flooding at selected locations.

The use of these CREST tools has now been extended to other locations in Africa. Read more here