The African Union Commission (AUC), through the implementation of the GMES & Africa Programme, conevened the first GMES & Africa Women workshop held from March 16 to 18, 2022 in Cotonou, Benin. The workshop gathered African women representatives working in EO-related fields, Consortia members and Leads and the GMES and Africa programme management unit (PMU).

This activity lies in the Aspiration 6 of Agenda 2063, which calls for “An Africa, whose development is people-driven, relying on the potential of African people, especially its women and youth, and caring for children”. One of the GMES & Africa phase 1 findings was that women evolving in EO-related fields were under-represented. Many stakeholders highlighted this during the different workshops and forums held during the Programme’s phase 1, and it was recommended that GMES & Africa phase 2 takes action to address that challenge.

Therefore, the AUC, through the implementation of GMES & Africa phase 2, set a requirement related to the inclusion of 30% of women specialised in EO-related fields as part of the Awarded Consortia’s teams. In addition, the AUC planned to create a group called “Women in GMES & Africa” to bring together women to share knowledge and best practices for their full involvement not only in GMES & Africa programme implementation but in general in earth observation initiatives and projects.

The objectives of the workshop were: i.To foster dialogue and networking between African women evolving in EO-related fields by gathering representatives of these women working in different areas of activity (public institutions, private sector and academia among others; ii. To allow women to express themselves and to highlight their needs in terms of EO science, Technology, Education and employment; and iii. To create the group “Women in GMES & Africa” and to define a roadmap for its activities towards gender equality in education and career in the Earth observation field in Africa.

Caption: The African Union Commission (AUC), through the implementation of the GMES & Africa Programme, conevened the first GMES & Africa Women's workshop in Cotonou, Benin during the kick-off and award ceremony for phase 2 of the programme.

The women in GMES and Africa are expected to yield the outcomes including: i. African women evolving in EO-related fields are gathered and engaged in discussing and networking between them; ii. Needs, challenges, knowledge and best practices related to the gender equality issues in Earth Observation are expressed and reported; and the group, “Women in GMES & Africa”, is created, and the roadmap of its activities are defined.

The three day meeting included an opening session with key messages from the AUC, and it was characterised by setting working group sessions based on the different areas of interest to showcase the challenges or advances or achievements in terms of reaching gender balance goals in the field of EO (at least at the level of GMES & Africa Program). Finally, the various sessions generated recommendations on lessons learnt, developed a working road map and elected the first govering council.

During the meeting, an election was carried out to select the first governing council of the group. The election process was conducted in line with AUC’s election guidelines. And 12 women (two per region according to AUC’s six regions definition) were elected to ensure that each African region is duly represented. The six regions are: Central Africa, East Africa, North Africa, Southern Africa, West Africa and the sixth region constitutes the African Diaspora. The working group will be led by Viola Otieno, EO Expert for Early Warning at IGAD-Climate Prediction and Application Center (ICPAC) - Eastern Africa and she will be deputised by Thioro Codou Niang communication specialist as Vice-President from Centre de Suivi Écologique (CSE) Senegal - Western Africa.

Below is the complete list of the governing council of the Women in GMES & Africa group. 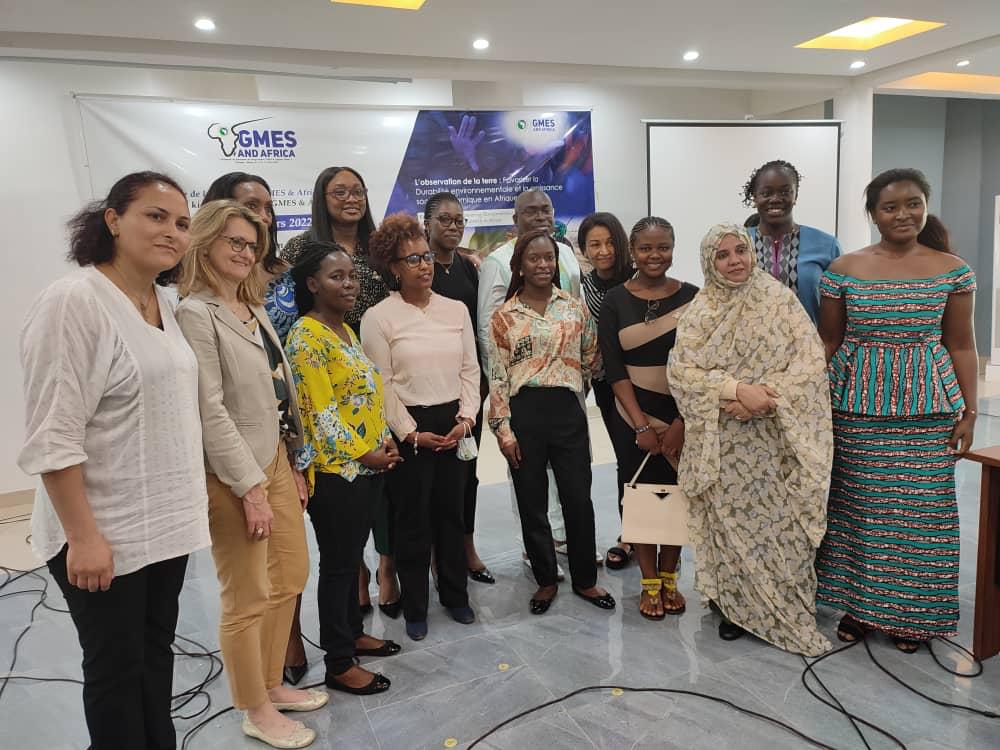 Caption: The first Governing Council of the Women in GMES and Africa group elected on March 18, 2022 in Cotonou, Benin.